My object in writing this book is to present the life of each astronomer in so much detail that the reader will understand the man's character and surroundings in some way. I have tried to describe as clearly as possible the main features of the man's most important discoveries.

There are many types of astronomers, from the observer who merely watches the heavens, to the mathematician who works indoors at his desk. Therefore, some chapters are written differently to suit each astronomer.

While I was writing this book, some chapters appeared in "Good Works" [probably a magazine]. The chapter on Brinkley was derived from an article on the "History of Dunsink Observatory," which was published for the 300th anniversary of the University of Dublin in 1892. The chapter on Hamilton was taken from an article I wrote for the "Quarterly Review" about Graves' biography of him. The remaining chapters are appearing in this book for the first time. I am indebted to my friend Dr. J. W. L. Glaisher for much of the information on Adams; they came from an obituary for the Royal Astronomical Society that Glaisher wrote. I am indebted to Professor H. H. Turner for information on Airy. I owe my hearty thanks to my friend Dr. Arthur Rambaut for his help in revising this work.

Of all the natural sciences, none offers such sublime objects to the observer as the study of astronomy. The study of the stars has held the same fascination since the earliest history of man as it does today. The movements of the sun, moon, and stars commanded the attention of the most primitive people from an astrological perspective -- because they thought the heavenly bodies influenced their human affairs.

But astronomy also had practical uses, even in primitive times. Ancient sayings show how farmers were guided by the movements of the heavenly bodies -- the positions of the stars indicated when to plow and when to sow. Mariners sailing across the pathless ocean relied on the heavenly bodies to guide their paths. So the movements of the stars were followed, not just from intellectual curiosity, but from practical necessity. And man began to seek answers to explain the causes for the always-changing displays he saw in the heavens.

Many of the earliest discoveries come from prehistoric times. The daily movement of the heavens, the yearly path of the sun's revolution, seem to have been known even earlier than the dates of the earliest monuments and structures built by early man. Early observers were clever enough to distinguish the more important planets by their wandering movements. They recognized that star-like objects -- Jupiter, Saturn, and Mars, and bright Venus -- had movements unlike the stars they resemble. And early observers were keen enough to recognize that Mercury had a similar movement, even though Mercury was only rarely visible. Ancient Babylonians observed eclipses and other phenomenon, and ancient Chinese archives record heavenly observations.

What we would consider astronomy started under the reigns of the Ptolemies in Alexandria, Egypt. The most prominent astronomer of that era was Hipparchus, who lived in Rhodes 190-120 B.C. His research organized existing observations into a coherent branch of knowledge. He realized that the first step was to compile an inventory of as many objects as could be seen in the heavens, and Hipparchus started this project on a small scale. This is exactly what astronomers do today with the help of their instruments and telescopes -- but Hipparchus didn't have any of those tools. He catalogued the main stationary stars for the first time (his star catalogue was completed in 129 B.C.). He studied the movements of the sun and moon, and formed theories about why their movements were always changing. Figuring out the complicated movements of the planets was much more challenging, but he tracked their movements to try to come up with a theory. We can appreciate his achievements all the more when we consider that, before he could start on his astronomical studies, he had to invent a way to calculate their orbits -- so he created what we call trigonometry.

But the discovery that most shows his brilliance was the celestial movement that we call the "precession of the equinox" -- the sun's slow shift to the west after the first day of spring due to the earth's tilt. This is remarkable when we remember that observations were still done without telescopes, and he didn't have records of previous observations to compare. Yet he not only detected this phenomena, but he recognized its importance. I'll try to explain this celestial movement because it's the first time in the history of science that we find accurate observation combined with skillful interpretation.

Equinox [equi-equal, nox-night] refers to the date when the hours of darkness are equal to the hours of daylight. To someone on the equator, this happens every day of the year, but to those living in the north or south hemisphere, day and night are rarely equal. But there's one day in spring and one day in autumn when there are exactly twelve hours of daylight, and twelve hours of night at every spot on the earth. When this happens in spring, it's called the vernal equinox; when it happens in autumn, it's called the autumnal equinox. Hipparchus realized how monumental this discovery was, and he set out to study this phenomena. A point in the sky can be defined in reference to the stars around it. Even if the moon obscures the light of the stars, they are still there. Hipparchus was able to determine the positions of both equinoxes as they related to the stars surrounding the sun's position, and he determined that each equinox was moving relatively to the stars -- but so slowly that it would take twenty-five thousand years to complete a full circuit of the heavens. Hipparchus mapped out this circuit so accurately that all astronomers ever since have recognized the precession of equinoxes as a foundational fact of astronomy. It wasn't until two thousand years later that Isaac Newton discovered its explanation.

Since Hipparchus's era, the science of astronomy has continued to grow steadily. One astute observer would record some phenomena, and much later, another astronomer would explain it. The history of astronomy is tied closely with the histories of the great men who worked to develop it.

This book will tell something of the lives of these great scientists, starting with Ptolemy, who began with Hipparchus's records and developed the form of astronomy that was in use through the middle ages. Then we'll read about the immense revolution in the way we thought about the universe due to the observations of Copernicus. Then we'll move on to the genius of Galileo and Newton, and finally to more recent astronomers who have extended the boundaries of our knowledge about the heavens, including some who only recently [1895] passed away.

Popular posts from this blog 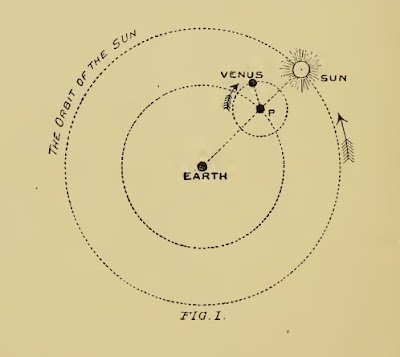 Great Astronomers in Modern English by Sir Robert S. Ball, 1895  (paraphrased by Leslie Noelani Laurio) To view the table of contents for the rest of this book, click here . Claudius Ptolemy, 100 AD-168 AD     Created the elaborate geocentric Ptolemaic model of the universe. The "P" in Ptolemy is silent, so the name is pronounced TOH leh mee. The career of the man who gets the first chapter in this book is one of the most remarkable careers in the history of human learning. Perhaps other men may have done more for science, but no other discoverer's ideas and authority has influenced the minds of men for as long as his -- his opinions about how heavenly bodies move were the ones everyone believed for fourteen centuries! The theories he explained in his book "The Almagest" [ online at archive.org ] were accepted as true for ages. In all that time, nobody even made any notable additions to what he laid out, and none of his many errors were corrected. He
Read more

February 20, 2019
The Declaration of Independence paraphrased into Modern English In Congress, July 4, 1776. The unanimous Declaration of the thirteen united  States of America Sometimes, during the development of human events, it becomes necessary for a people to destroy the political bond that has connected them with another people. It becomes necessary for this people to take on a distinct and equal position that the Laws of Nature and the God of Nature entitles them to. When that happens, decency and a respect for the opinions of mankind require them to state the reasons that induce them to separate. We believe the following truths are so obvious that they're undeniable and unquestionable: We believe that all men are created equal, that their Creator has given them inherent fundamental rights that include [ but are not limited to ] the right to Life, the right to Liberty, and the right to seek happiness. We believe that governments are decreed among men in order to guarantee thes
Read more